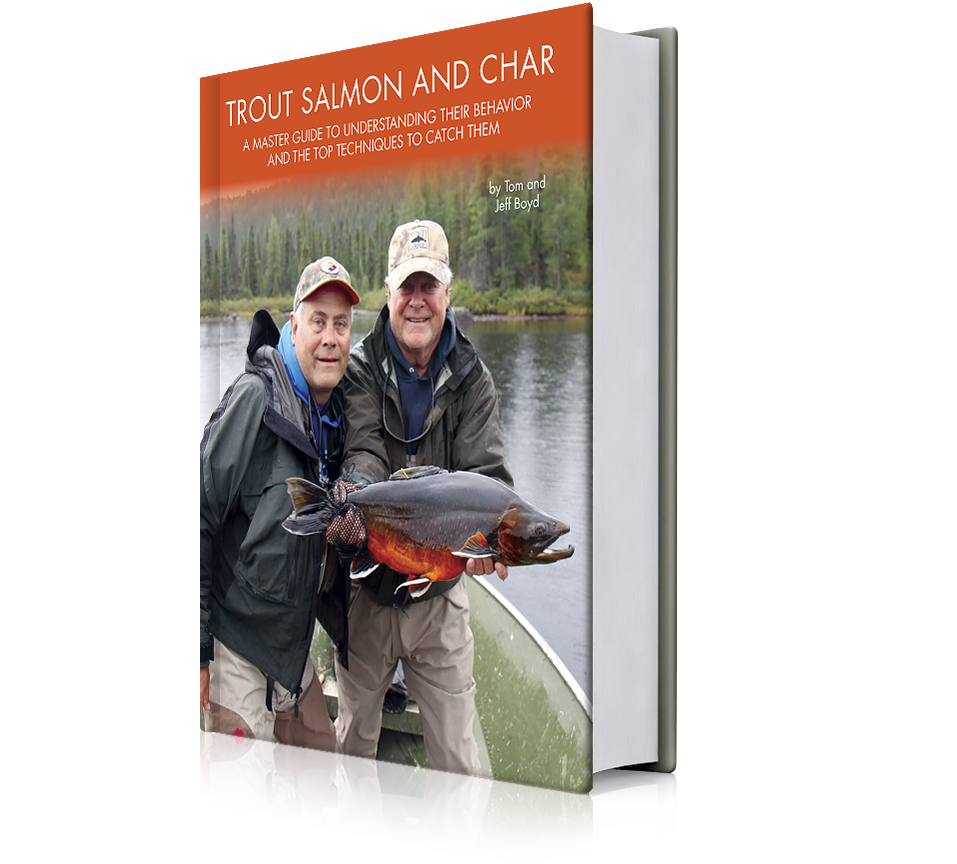 By Tom and Jeff Boyd

Wild River Custom Publishing was pleased to work closely throughout 2018 with Tom and Jeff Boyd on creating their impressive new book, Trout Salmon and Char: A Master Guide to Understanding Their Behavior and the Top Techniques to Catch Them.

The father-son team of seasoned anglers has released their life’s sport in print, and we are doubly pleased to offer copies hot off the press to our customers. Order yours today and we will ship immediately.

This full book offers a comprehensive look at all the major species of salmonids in North America, chapter by chapter: biological life histories, ranges, habitats, feeding habits, notable fisheries, matched with a useful rundown of favorite flies, tackle and specialized methods the Boyds have found successful in their decades of travel to great fishing destinations.

Each chapter starts with an engaging, entertaining story about a personal experience pursuing the headline species that we know you will enjoy. This is both a sweeping travelogue and a practical guide to how to gear up and fish effectively when you get there.

In Trout Salmon and Char, Tom’s and Jeff’s extraordinary revelations on freshwater gamefish behavior, characteristics and techniques to catch them are beyond remarkable. The Boyds believe that “understanding fish behavior is critical in determining successful strategies for catching them.” For a lifetime, much time and effort has been invested in salmonid behavioral research, often with noted guides, captains, scientists, universities, organizations and with the aid or direction of governments.

Over a generation, the Boyds have explored and fished many of the world’s top salmonid destinations with basic research goals involving tagging, DNA analysis, habitat and range, and individual characteristics and species’ differences to learn all they can about the Salmonidae family. They have applied their learning to develop techniques to capture our most cherished coldwater species. As far as I’m aware, Tom and Jeff are the only ones to have captured all of the salmonids in their book—and they did it with a fly rod. For decades the Boyds have been strictly catch-and-release fly fishermen and return all their fish, including world-record size, to the wild except in the few instances a fish perished in the fight. Although fly fishermen, they discuss techniques in their book that will help all fishermen increase their catch.

Tom and Jeff are forever the students—eager to continue to learn. You can never know enough. Every fishing day brings a new experience and new revelations. The old saying that 10 percent of the fishermen catch 90 percent of the fish is pretty much true. That 10 percent work harder, plan more, research and accumulate more information, and utilize ever-improving tactics and techniques. There was little or no luck involved in being a successful fisherman. The only luck involved occurs when effort, preparation and practice meet opportunity.

I’ve known and worked with Tom Boyd for many years and his knowledge and contributions to Fly Fish America and other publications is unparalleled. Jeff has joined his father in expanding their knowledge since the mid-1980s and is now sometimes the teacher. Some of their conservation work is remarkable. A few examples are:  getting the commercial gill nets removed from Newfoundland/Labrador Atlantic salmon-Arctic char rivers; preventing the construction of dams in wild rivers; discovering new salmonid sub-species; discovering the mysteries stated by Dr. William Flick of Cornell University as to why giant brook trout survived Labrador’s harsh waters; contributing to tagging programs that discovered brook trout of 25 years of age and counting; establishing fish ladders; testifying and consulting for local, state, and national governments; stopping the elimination of menhaden by huge purse seiners in Long Island Sound; fighting to stop the proposed Pebble Mine site in Bristol Bay, Alaska; etc.

The knowledge and experiences over a lifetime have given them confidence to say “if there were only one fish to catch, we could catch it.” Tom and Jeff used their knowledge to rank the game fish in the book according to fighting ability, heart, will, difficulty to catch, and other esoteric factors. They admit it is a purely subjective ranking and invite commentary and/or disagreement.

Tom and Jeff have done what few if any others have done: combine half a life of knowledge derived from scientific research with the knowledge and skill of professional fly fishermen. The results are offered in these pages and provide unprecedented advantage to an angler.

The purpose of Trout Salmon and Char is “is to present new findings, behavior patterns, new and proven tactics and techniques, fly choices, proper presentation, and superior destinations” that are merged to inform and expand your ability to catch salmonids.

Bill Battles is the founder and publisher of Fly Fish America and On Target magazines. He is a successful fly fisherman and a practicing attorney in North Conway, New Hampshire.