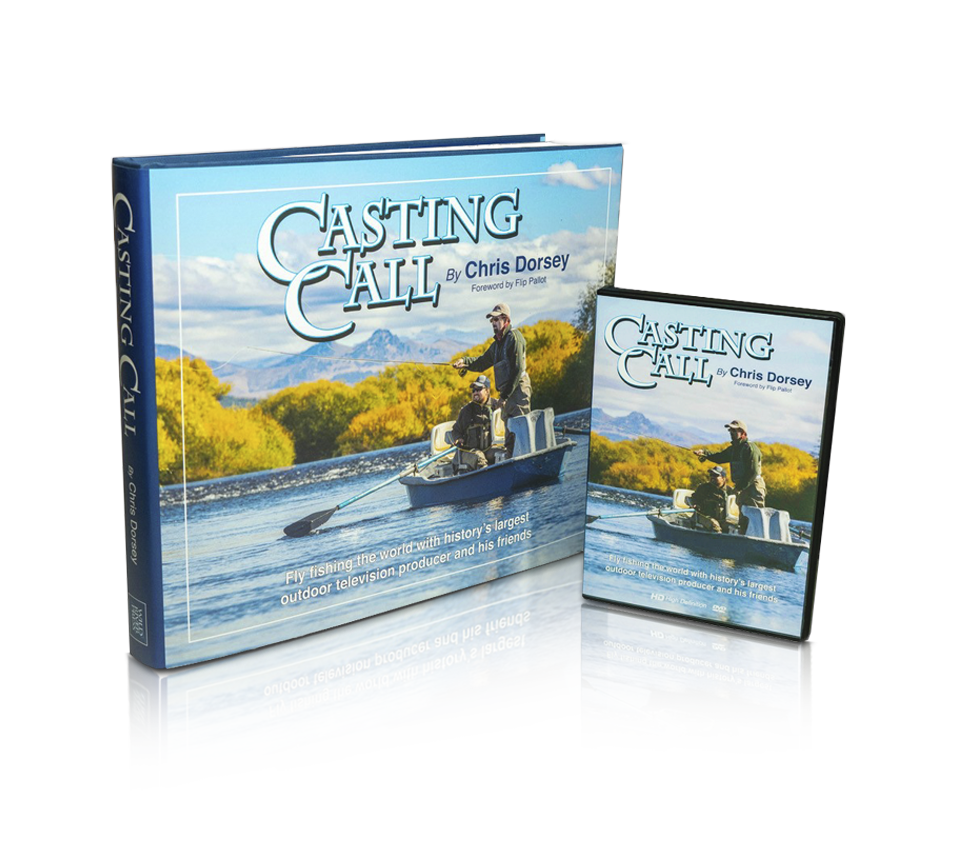 From one of the world’s most widely traveled fly fishermen and the largest producer of outdoor television in history comes the first of its kind celebration of the planet’s greatest fly angling. Chris Dorsey’s new book and film set, Casting Call, takes readers and viewers to epic fly waters from the American West to Alaska, across Canada, to the fabled flats of the Bahamas and Belize to the jungles, marshes and highlands of South America and many points in between.

“The lucid descriptions of the lands, waters, guides and Dorsey’s own family members keep his book from being the usual self-aggrandizing fare of the angler abroad. It is instead an angler’s celebration,” says author Tom McGuane, “I put his book down with the feeling that I’d been on these wonderful outings with him.”

Dorsey spent more than two decades investigating and chronicling the fishing, people and unforgettable places home to many of the world’s greatest fly-fishing expeditions while producing nearly 60 television series. In the process, his teams amassed a library of more than 100,000 hours of HD footage and nearly 150,000 photographs, making Casting Call (the book and film) an unmatched celebration of the world of fly fishing.

Dorsey’s productions—including Sporting Classics with Chris Dorsey airing on Outdoor Channel and in syndication on more than 120 stations coast to coast—are seen across the globe on a variety of networks. Some of those networks include ABC, Discovery Channel, History Channel, National Geographic, HGTV, DIY, Travel Channel, ESPN, NBC Sports, Oxygen, WGN America, Outdoor Channel and other affiliates across Europe, Asia and South America.

Chris Dorsey is also the author of 11 books on outdoor and natural history subjects and his work has appeared in scores of sporting periodicals across the English-speaking world as well as National Geographic, Newsweek, The Wall Street Journal, Robb Report, Forbes and many others. He’s a member of the Outdoor Legends Hall of Fame and is a recipient of the Ray Scott Trailblazer Award as well as the Curt Gowdy Memorial Award.

I am an angler who has fished every continent except Antarctica, which I believe qualifies me to say that when I read Chris Dorsey’s Casting Call, it made me feel like I had returned to many of the places I had fished years ago. Chris has the same knack of painting a picture through the written word that Ernest Hemingway possessed and it makes you feel like you are actually there when you read his chapters. If you’re looking for a fascinating and interesting read, Casting Call is a keeper. —Stu Apte, author Of Winds and Tides

If you are looking for destinations to add to your fly-fishing bucket list there are few people as qualified as Chris Dorsey to be your source.  He’s a top-notch angler and world class film maker, and over the years he has seen many of the destinations that are merely a fantasy to most of us.  So if he devoted a chapter to a location in this book you know you can confidently add it to your list. Much more than a guidebook, this is a love story to some of the world’s most amazing places, told in ways that are a joy to read.  —Tom Rosenbauer, author, The Orvis Fly Fishing Guide

When the legendary fly fisherman Lefty Kreh begins a fishing story in Chris Dorsey’s terrific book, with the opening line, “I remember fishing with Castro and Hemingway in Cuba,” well, I was hooked! As a basically competent fly fisherman, I read this book with glee and not a little envy. The individual stories of famous and not so famous people hoping to achieve ‘tight lines’ on various rivers and flats across the world had me salivating. Dorsey’s passion for fishing, for saving our environment and waters where fish live is beyond commendable. He’s a hero. Do read this book. Among its many attributes, it gives serious pause for thought regarding our planet, our waterways and how we all can strive to make it better. This is a must read!  —Liam Neeson, Academy Award Winner

If you’ve ever dreamed of fly fishing all the best places—maybe with a few celebrities—Dorsey’s Casting Call awaits. As if that wasn’t enough, the companion film to the book creates an unmatched celebration of the world of fly fishing. —John Gierach, author, Dumb Luck and The Kindness of Strangers

Chris Dorsey knows what he’s writing about. He is an expert fly fisherman and outdoorsman…and he’s fished almost everywhere. He’s also a talented writer and, as such, describes the excitement of fishing about as well as anyone I’ve ever read. If you fly fish, you’ll love this book, and if you don’t, you will want to after reading it. —Huey Lewis, Grammy Award Winner

When it comes to hunting and fishing, Chris Dorsey has done it all…or at least most of it. He’s pursued his chosen sport the world over and has enjoyed every minute of it and writes about it in ways that make those who haven’t had the same experiences feel as if they were there with him. At the same time, he is always aware that the game he pursues and the land and water in which it lives are constantly threatened by greed, thoughtlessness and those who prioritize other interests. He worries even as he celebrates his adventures that our children and grandchildren may never experience them unless we are prepared to defend that which makes it all possible. — David Keene, Washington Times

Chris Dorsey’s excellent book, Casting Call, jolted my memory bank of all the great fish we chase and the spectacular, fragile places they call home. It made me happy and proud to be an angler of the world, and someone like Chris who is relentless in the fight for their survival!
—Andy Mill, author of A Passion for Tarpon

Having been on a few trips with the peripatetic Chris Dorsey, his passion for fly fishing–from his backyard to globetrotting to remote locations around the world–will surely engage you with his unique perspective as he shares his adventures in pursuit of fish and memories. Kick back and vicariously immerse yourself into this global fly fishing odyssey as he regales you with artfully crafted stories of places and people you may know. Along the way, he’ll fuel your own passion to seek new locations that you will most assuredly want to add to your bucket list.  —Bill Klyn, Patagonia

If you are going to create sporting art, you must live the experience or you cannot be authentic. When I read Chris Dorsey’s Casting Call, it was clear that he was drawn to waters for many of the same reasons they attracted me…the fishing, the beauty of the places and the inspiration that they bring. While this book takes you to remarkable rivers, lakes and flats across the globe, it is as much an insightful journey into the heart of fly fishing as it is a celebration of destinations. While I might work on canvas and Dorsey in words, I was comforted to learn that we share the same love of waters and fish that is central to the spirit of all fly fishermen. —Arthur Shilstone, Flashes in the River

Casting Call is alive with the wonderment of adventure with each turn of the page.  Dorsey’s vivid descriptions bring the reader right alongside as he pursues fish across multiple continents and the Caribbean islands.  Whether navigating the treacherous waters of the Amazon to the flats paradise of the Bahamas, you will find yourself absorbed in some of the most exciting fishing stories ever.  Dorsey also reminds us that the heritage of the angler is that of river keeper and eternal advocate for clean water and healthy fisheries. —Jeff Crane, President, Congressional Sportsmen’s Foundation

In Casting Call, Chris Dorsey takes us on a rollicking tour of some of the most beautiful — and coveted — angling destinations on earth.  From Bristol Bay Alaska to the trout streams of Patagonia, Dorsey brings to life the kind of places most fishermen dream about.  Dorsey is a true outdoorsman and conservationist and he knows his subject.  Add his wry sense of humor and mix in a cast of characters ranging from Tom Brokaw to Yvon Chouinard, and you have all the ingredients for a fast paced and memorable narrative.  —Guido Rahr, President, Wild Salmon Center

Anglers have a unique sense of place. We’re called to chase fish in distant waters, and what we take away from the journey is always more than a fish story. It’s also about the adventure, our relationship with nature, and the people and cultures we encounter along the way. In Casting Call, Chris Dorsey shares his own sense of place in a lively atlas of bucket list destinations that entertains and inspires the reader with “I want to be there” stories. And to help ensure that we can one day go and experience them as well, Dorsey has devoted his considerable storytelling talent over the years to the cause of conservation, including our fragile flats ecosystem.—Jim McDuffie, President and CEO, Bonefish and Tarpon Trust

If you’ve read Chris Dorsey’s work over the years, it is of no surprise that Casting Call thoughtfully weaves the many intricate threads of this beautiful book. Dorsey’s vision for capturing the deep art of fly fishing is best known through his acclaimed television work, but this book—and companion film set–provides a unique view of the powerful allure of fly fishing while giving the reader and viewer a behind-the-scenes look at some legend quality fishing experiences. You need not be a hardcore fly angler to get enraptured in this book. It is a must read for anyone who loves, or for that matter wants to love, the art of fly fishing. —Pat Murray, President, Coastal Conservation Association