Days of Rivers Past

Days of Rivers Past is part memoir, part requiem, written by retired British Columbia steelhead biologist and avid angler Robert S. Hooton of Vancouver Island. It is essential for any serious steelheader. 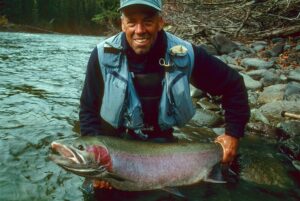 Hooton has fished 81 steelhead rivers throughout the province. From his boyhood days fishing the Vedder and Squamish, later the Gold and the Dean and the Thompson, and 37 years of public service as one of the most knowledgeable and courageous steelhead scientists of our time, Bob tells memorable stories and shares many keen observations in this impressive book.

The photos of British Columbia rivers past and present are alone worth the modest price of $75. Eye-popping pictures of 42-pounders will leave you moonstruck.

Buy this book; give this book. Half your purchase price of each copy will go the British Columbia Federation of Fly Fishers conservation efforts to help restore wild steelhead in the last bastion.

“The near elimination of the premier sport fish in British Columbia river systems over the past half-century has been a tragedy. That this took place despite full knowledge in scientific circles of what was happening is a damning indictment of our willingness to turn a blind eye to what should have been of critical concern to us all, anglers and non anglers alike.

“Bob Hooton’s river-by-river account of the state of steelhead populations in B. C. is thus timely. Hooton’s many years of experience in steelhead scientific research and management, and his intimate knowledge of the history of this decline, make him the authoritative source to chronicle where things are today with respect to steelhead survival, and what can be done to reverse the declines of the past decades. His book deserves to be on the bookshelf of every environmentally minded Canadian.”

Former Canadian Minister of the Environment, Fisheries and Oceans