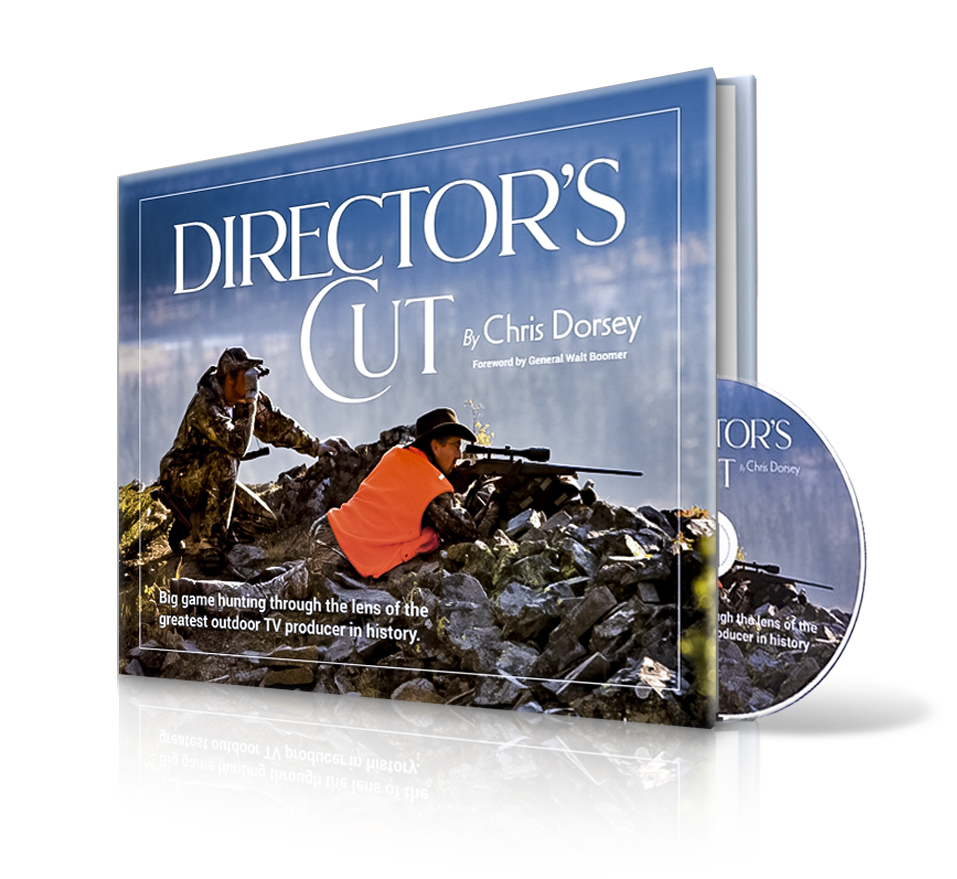 The world of sporting literature has a new classic from one of the planet’s most widely traveled hunters. Director’s Cut is a book and film production more than 15 years in the making. Author and Executive Producer Chris Dorsey, along with a team of the world’s best sporting life photographers and cinematographers, embarked on expeditions to distant corners of the globe to create an indelible portrait of big game hunting.

Dorsey has spent the past 25 years investigating and chronicling the animals, people and unforgettable places home to remarkable big game hunts while producing nearly 60 outdoor adventure television series. In the process, his teams amassed a library of more than 100,000 hours of HD footage and nearly 150,000 photographs, making Director’s Cut (the book and DVD) an unmatched celebration of the world of big-game hunting.

Internationally acclaimed photographers Dusan Smetana, Marcos Furer and John MacGillivray spent thousands of hours in remote locations to capture a stunning collection of images that help make the 400-page opus an instant classic. Each chapter features a 10-minute corresponding film shot on location during the creation of Director’s Cut.

“We set out a long time ago to bring together a talented team to create an enduring work,” says Dorsey. “Something that had never been done before in the world of big-game hunting. It was a monumental undertaking but to be able to share the fruits of this effort now brings a great deal of satisfaction to all of us.”

Dorsey’s productions—including Sporting Classics with Chris Dorsey airing on Outdoor Channel and in syndication on more than 120 stations coast to coast–are seen across the globe on a variety of networks. Some of those networks include ABC, Discovery Channel, History Channel, National Geographic, HGTV, DIY, Travel Channel, ESPN, NBC Sports Network, Oxygen, WGN America, Outdoor Channel and other affiliates across Europe, Asia and South America.

Chris Dorsey is also the author of 10 books on outdoor and natural history subjects and his work has appeared in scores of sporting periodicals across the English-speaking world as well as National Geographic, Newsweek, The Wall Street Journal, Robb Report and many others. He’s a member of the Outdoor Legends Hall of Fame and a recipient of the Ray Scott Trailblazer Award as well as the Curt Gowdy Memorial Award.

Quality-of-life pivots on quality air, soil, water and wildlife. In this culture war against truth, common sense and natural science, bold and honest dialogue is paramount for the future. Chris Dorsey has been a leader forever on the front lines sharing and celebrating the perfection of a hands-n conservation ethos with his outdoor lifestyle. When Chris speaks in all forms of media, he represents the heart and soul of of the ultimate conservation family. Director’s Cut is the missing kink in our education system to reconnect with God’s miraculous natural creation. —Ted Nugent

The vivid writing and images of this book convey a sense of the majesty of place and of wildlife, and of the connection to both that is central to the passion of every hunter. You will witness both the excitement that comes only from the heart and the hard work of a successful stalk. Along the way, you’ll experience the reward of sharing the adventure as well as the hunter’s bounty. What this book offers is the best of hunting. —Simon Roosevelt, Boone and Crockett Club