Groundbreaking New Book is the First to Focus Exclusively and in a Big Way on Women Anglers.

Fifty Women Who Fish is the most complete book ever published about where, why and how women fish.This exciting new book is a sweeping portrayal of the lives and adventures of 50 exceptional female sport fishers—some famous who travel the world fishing faraway rivers and oceans, others who are everyday anglers content to explore local lakes and beaches.

Of 35.8 million anglers who fish for sport in America, 9.8 million are women, according to the U. S. Fish and Wildlife Service’s most recent comprehensive national survey of outdoor recreation.

Although more than one in every four American anglers is a woman, until recently fishing for sport—especially for prized game species—was considered by many a “man’s game.”

Fifty Women Who Fish puts that myth to rest forever.

sought out a wide range of individual female anglers, age 20 to 90, from Florida to Alaska, Massachusetts to Oregon. They fish for trout, bass, tuna, bluefish, stripers, tarpon, bonefish, roosterfish, marlin, sailfish—anything and everything that swims in freshwater and salt. They fish with flies and lures and bait. All are passionate about their favorite outdoor sport. Many of their personal stories are riveting. All are interesting.

“As these diverse and vivid portraits reveal,” publisher Thomas R. Pero said, “women are not only highly accomplished on the water, they are increasingly active in efforts to protect and restore the aquatic ecosystems and wild populations of fish on which our entire sport depends.”

The large-format book is a gorgeous hardcover production of more than 300 pages with hundreds of color photos. It sells for $59.95. The book is proudly printed in Michigan by skilled American craftsmen on paper milled in Wisconsin.

ANGLERS PROFILED IN THE BOOK

Steve Kantner is a former guide and outdoor expert who entered the fishing business after stepping off the canal banks in his native south Florida. Steve’s cameo enterprise, Landcaptain, Inc., takes its name from how he guided customers on foot—or from the seat of his car. A Florida fixture for more than 50 years, Kantner has walked (and fished) practically every foot of surf, pier and canal bank that’s accessible to anglers on foot.

After starring in various television productions—ones that showcased his unique approach to fishing and guiding—and hosting a drive-time radio show, Steve decided to become a full-time writer. He later added fly-casting instructor, seminar promoter and, eventually, editor whose byline has appeared in Salt Water Sportsman, Florida Sportsman, Fly Rod & Reel, Fly Fishing in Salt Waters and other popular publications. He has also written for the South Florida Sun-Sentinel, and was once the assistant editor as well as editor-at-large and opinion columnist for Florida Fishing Weekly.

Fans of Andy Mill’s classic A Passion for Tarpon, published in 2010 by Wild River Press, will recall that Kantner wrote the angling history chapter. He is also the author of The Ultimate Guide to Fishing South Florida on Foot (2014) and, most recently, Backcountry Flies: From Swamp to Surf (2019). 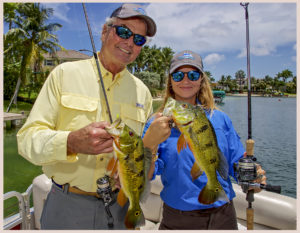 Steve is widely regarded as the “walk-in expert.” In sharing what he’s learned with others, he adds practical knowledge to scientific perspective—thanks to  a degree in science―along with a twist of Falstaffian humor. The result, he hopes, will direct his readers not only in finding fish, but also in how to catch them. And now he’s embarked on that greatest of adventures: the study of accomplished women.

Steve lives with his wife, Vicki in Fort Lauderdale, Florida, along with the family cats.