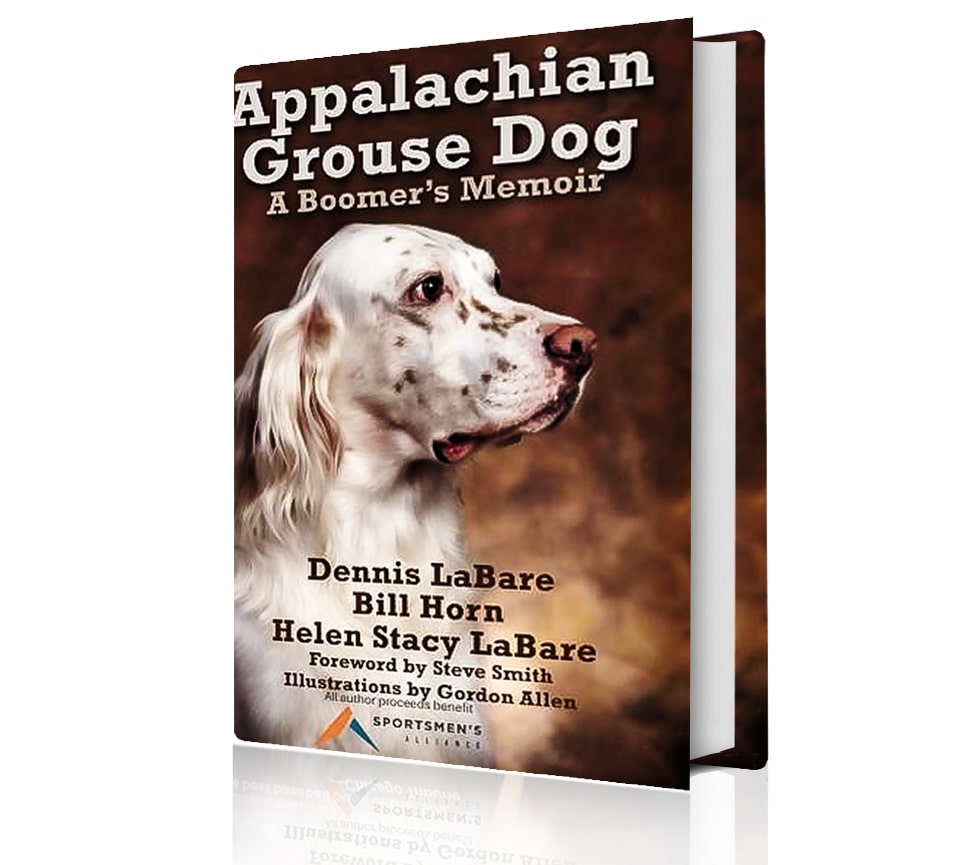 This is a love story. It’s the tale of a handsome male orange belton English setter who patrolled the grouse and woodcock coverts of Maryland, West Virginia, Maine and beyond for the better part of 15 years.

I have known Dennis LaBare, lead author, for more than 30 years, from our Trout Unlimited days when I covered his tireless efforts to create the Falling Spring Greenway in Pennsylvania for Trout Magazine. We share roots in New England. Reading about his personal journey of discovering old-school bird shooting and fly fishing in a rapidly changing farm-to-suburban paved-over world resonated with me, as I think it will with you.

In the autumn of 1993, on a Sunday morning, Dennis left his Baltimore home and drove over to coastal Delaware hedgerow quail country, where he met Puppy for the first time—one of two pups that remained from a litter of nine. In Part 1 of Appalachian Grouse Dog, his stories of dog and man getting to know each other are at turns entertaining and poignant.

Bill Horn, who in the 1980s introduced Dennis to grouse hunting over his female blue belton named Feathers, writes in Part 2: “Dogs are children. Wrestling with both the canine and human forms has taught me that it takes a combination of love, patience, firmness, and consistency to succeed.” Horn, who served as Deputy Under Secretary of the Interior for President Reagan, is a serious guy. He draws from his shooting journal keen observations of watching Puppy mature to Commander: the proverbial bird dog of a lifetime. He writes lyrically of a frigid December day with  a heavy northwest wind “feeling like an icepick” and a covert “loaded with grouse hiding and feeding among tangles of grapevines laden with purple fruit.”

In one of life’s interesting twists, the last ruffed grouse Bill killed over Feathers, the day after Christmas 1994, was the first day Dennis brought along Puppy. The inevitable string of bumped birds and missed scents ensued before Puppy began to show his brilliance. Once Dennis collared the bewildered dog and hauled him back to the car. Bill urged his friend to be patient—amusing, if you know Dennis.

Enter Stacy Miller (soon LaBare) in Part 3. Stacy was an environmental planner and urban forester in the Washington, D. C. area. Stream-ecology consultant Dennis appeared at her office in his usual whirlwind mode, glanced up at her framed diploma and announced that he, too, had gone to school in Maine. And, oh, would you like to see my cute new puppy out in the station wagon? “Chick magnet,” she instantly deduced of the silky young setter.

Stacy’s remembrances of Commander are vital to this fine tribute to a beloved bird dog, including, against odds, his surviving a malignant tumor. I guarantee that Stacy more than once saw her sentences on the screen through the blur of tears. She is quite funny. She recalls sleeping with Dennis the first time, with Puppy in his proper place beside his master—and between them. The dog’s dreams, she writes, “must have been magnificent!” He wasn’t just twitching; he was running “in full bore.” Sometimes he’d run himself right off the bed. When Stacy and Dennis were startled awake by the thud, they would find him on the floor, wedged between bed and wall with his feet in the air, calmly waiting for the rescue squad.

Years later, with Commander retired from active pointing duty and suffering diminishing hearing and sight, Stacy goes on long walks with him in the woods, sitting on a log for lunch, feeding him drive-up cheeseburgers. At the end he breathes his last in her arms.

I have known Dennis for a number of years—can’t remember how we met, other than somehow I became one of his wide circle of friends in the wingshooting community. I have hunted with him and behind his big belton setters, and a more dedicated dog guy doesn’t exist—and I know a lot of them.

But he didn’t get there all at once, and his experience pretty much crystallizes that of thousands of other late comers: The bird-hunting bug bites them; they hunt with someone who has a good dog; they get a pup; they expect more from the pup than he can deliver; the frustration grows . . . but so does the experience, and hunter and dog learn from each other and become good at the game. That’s part of the story as told by Dennis, his good friend and mentor Bill Horn, and Dennis’s wife Stacy. They were helpers and observers, watching the changes to Dennis and the canine star f this book, and English setter named Commander who, for 15½ years, was the center of Dennis’s grouse-hunting world. . . .

In this book, the pearls of advice given to Dennis by Bill Horn are jewels for any dog person to add to their collection; you can learn a lot about training a grouse and woodcock dog by reading his section alone.

But if you did, you’d be cheating yourself, because this is a book about the evolution of a sporting life, and life well lived—and how so much of what we do, we do for the dogs. And that’s because their lives are spent—every moment of every day—doing for us.